Official website of the Cosy Corner, Dedicated to those who love Alykanas & Alykes

Well! we had a family in a few days ago and what an experience it turned out to be! You know how I feel about people having to wait for their food and if I know it is going to be a while I tell people before they commit to order. The father was the most obnoxious person I have ever met. I told them there will be a wait for their food as around 45 people had just come in at the same time and his was the last of those to be ordered.
The guy constantly moaned all the time he waited, about every 20 minutes and eventually I told him I would not be offended if they left, but they stayed! Asking the staff, we worked out that they had waited about an hour and 20 minutes for their food, which as you know is freshly cooked. They all devoured the food. After finishing the meal he complained that it was not what he had expected. He had a chilli sloppy Joe, one of our most popular burger meals and ate all but a spoonfull. I went over to him and said "I'm sorry you didn't enjoy your food" he replied "I never said anything" I walked away! My thoughts were that this was strange. I asked the person who told me of his complaint and she confirmed it! Jules went over and asked, "was everything ok" I wont tell you his reply, obviously not realising who she was, he was totally abusive to her and then after, to other female members of my staff, I told him abruptly not to be rude and if he had a complaint, tell me. He didn't. Now he and all his friends are attacking us over the internet! Coward.
You know also how I feel about Trip Advisor and that I have removed their page from my website. Although we are, or should I say were number 1 on there, I wish that I could come off it. People like this guy use it to attack business owners when they don't get their own way!
read what these people from Manchester are doing! and Trip Advisor allow this although it is obviously a bogus attack!

I really don't care about trip Advisor but it has hurt my pride. We all work hard to achieve our standards and keep people happy and when you have to face this it is like being kicked in the groin and it makes me want to give it all up. I wish that the guy would have had the guts to attack me like a man! Face to face, not this cowardly backstabbing!
The thing is, we get a huge amount of new trade from internet exposure, as you know we are hidden and without word of mouth nobody would find us. Sadly, Trip Advisor is most peoples first port of call when travelling to a new destination. The first thing they will see when they log on are these reviews! as we head into a very important part of the season this is going to hurt us! yes! the coward wins! and Trip Advisor! well, they are too big to care!
I have asked to have my listing removed but no luck. The thing is that it is not really my listing. The people that first reviewed us created the listing and we have no control over it!
About 3 or 4 days before this happened, knowing the troubles that I have had with bogus reviews, Mel Dave and Caitlin turned up to begin their holiday. Mel brought me this article from the times (didn't know you were that intelectual Mel!!) and said to me "this reminds me of the troubles that you have had" I read it and sure enough I agreed.
If you knew the half of it! it is discusting how these people allow this to go on, it is hard enough to survive in this financial climate as it is.
The strange thing is that Mel and family were sitting on the next table and after the incedent Mel told me that they woofed their food down like nobody's business and their plates were almost empty! The guy was annoyed because he had waited for his food, of that I am guilty and always will be when busy! and he wanted to bully the women on my staff and I corrected him!
Please read! 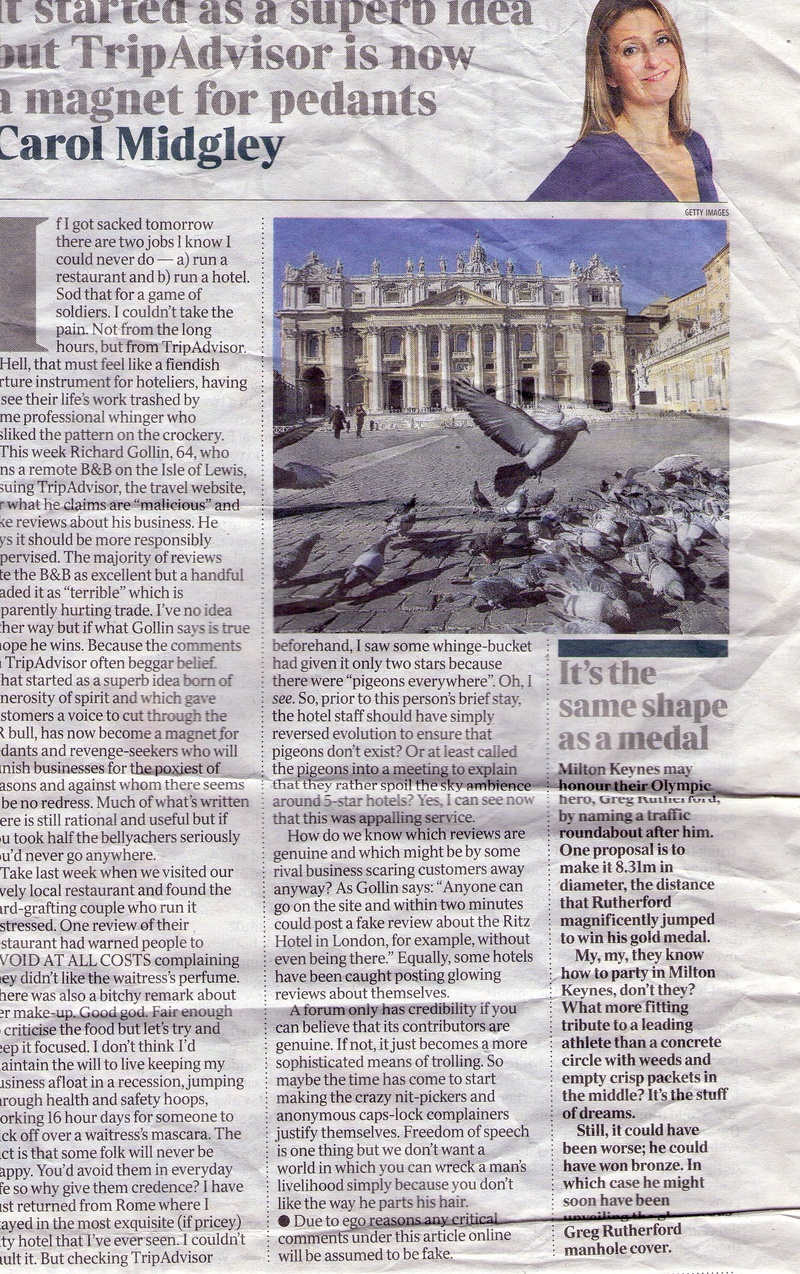 I hope Mr Gollin wins too and why should Trip Advisor be a party to Libel! which is what it is.
I am licking my wounds this morning and although we have friends over I am going to find it hard to be entusiastic today, I have a massive black cloud over me!
In our lives we are surrounded by people who appreciate what we do for them but the rest of the world will only see what Mr and Mrs Cowardly-moany-people say about us! I hope it makes them happy!
The most annoying thing is that out of the 3 reviews only his wife has used her Trip Advisor account to post. Using names like "plateof pedigree" and "Harshbut truthful" as his member names shows how Trip Advisor is being abused and how accurate the reviews are! The trouble is, people take it for Gospel!
Anyway!! Have a nice day guys!

Oops, you forgot something.

The words you entered did not match the given text. Please try again.

Reply NickSargent
2:14 AM on September 13, 2012
Hey Shortie.
Not good to hear its damaged your pride. As a business owner myself, these type of people definitely make my sh#t itch. The food in your place is out of this world, i eat in there every day when in the area, top place. always people who go out to complain. cant wait to see you all next july! oh and nice video of alykanas in the winter, how beautiful! peace out brother.

Reply pittstop
3:06 PM on September 11, 2012
Hay ho shortie I've just posted on trip advisor sorry I called them tossers but it had to be said keep up the good work and all the advice you provide see you in 2013 but around june time and in the words of the bard do not let the bastards get you down

Well, our party of 8 had a great meal last night, and great service so thanks again for that. In my opinion the kind of review that has caused you so much concern really says more about the reviewer than the service and quality of food that you provide. I would not let it worry you because you can look yourself in the mirror and be confident that you are providing something that the overwhelming number of people who visit you want and enjoy. Why else would they keep coming back! We will be back and will bring others too. You are all doing a terrific job and long may it continue.
Reply Barry Shelley
12:28 PM on August 30, 2012
Just seen where they stayed. Says it all really.
Reply Gilly
8:33 AM on August 28, 2012
some people just go on holiday to moan! Don't let it upset you Shortie! you're doing a great job! x

Reply gilly
12:05 PM on August 26, 2012
Hi shortie you can not please everyone all the time but just look at all the return customers you get. So that tells us all you are doing great things at cosy. You Jules and your gang are great for alykanas so keep your chin up and keep up the good work see you next year.

Reply Alan + Alison (Evertonian)
11:08 AM on August 24, 2012
your still number 1 on everbody's list mate,including trip advisor regardless of what these stuck up *+?#: think mate,they cleaned the plates then moaned hoping to get a freebie,i wonder how many times they tried that while they were there in different places? so keep your chin up mate and your head held high.....you all deserve it at cosy keep up the good work,see you soon.Alan.

Reply pd
9:18 AM on August 24, 2012
Shortie , whatever happens in my life ...whoever abuses me , upsets me or wants to steal from me ...there are three people in my life who love me , ultimately , this is all that matters to me.

Reply Jayne & Ian
5:45 PM on August 23, 2012
Looks like a couple of the bad reviews have disappeared. Makes the remaining two look even more pathetic!

Reply patrick
3:25 PM on August 23, 2012
Hi shortie i know its easy for us to say dont listen to these morons but please dont there are certain people who are put on this planet just to whinge and moan all there life. i found the cosy for the first time this year and this was my 4th visit to alykes wish i had found it sooner, The food,welcome and service was first class you and your staff do a fantastic job i will be back in alykes next year and will be paying you a few more visits to sample your fine food. All the best Patrick

Reply Denise
3:25 PM on August 23, 2012
Hello Shortie, Jules, Andy and all the briliant people that work at Cosy corner, please please try to ignore the reviews of the rude ignorant moaners. Your restaurant is one of the best me and Brian have been in, the food is outstanding and all staff are polite and brilliant. Keep smiling. Loved to everyone see you next year.

Reply John_in_Essex
2:18 PM on August 23, 2012
What a load of rubbish. Fortunately in a few good reviews time those will drop off the first page.
Also I have reported them as suspicious to TA & told them that leaving that sort of nonsense up undermines TA's credibility. Doubt they will do anything, but most level-headed people will view such a vicious review like that as totally out of keeping with the rest & an obvious personal attack, & so therefore just disregard it.
I know it gets to you short one, but chin up, go have some fun with Tony & co, I know how much you was looking forward to it.

All the best to you all

Reply Liz Snaith
2:13 PM on August 23, 2012
Hi shortie and crew People like them make me so mad. properly throught if they complain they would get their meal free. Bet they complain every where they eat. Keep you pecker up WE LOVE THE COSY nad can't wait for the 16th September.

Reply Jayne & Ian
1:47 PM on August 23, 2012
Don't let them grind you down. Hopefully it will be obvious that these reviews are from the same source as they are clumped together, and swamped by excellent reviews. Carry on doing what you are doing, it works xx

Reply tonybax
1:43 PM on August 23, 2012
div,nt worry m8
its a plus when you wait then you know its fresh,
get the greek mixed grill ready 3 weeks sunday mmmmmmmmmmmmmmmmmm

these sort ov people arnt worth it !!!

Reply Steve & Sandy
11:09 AM on August 23, 2012
It's a shame some people have nothing better to do than complain. They obviously have nothing really important to worry about in their sad lives. Cozy Corner food is great, we have visited in High Season and October, the service has always been good, you all make a determined effort to talk to your customers and make them feel appreciated - however busy you are. If there is sometimes a wait for good food.....just enjoy the atmosphere of the place and have some more wine ! Hope to be back soon, Coxy will be our first stop !
12Next »