Official website of the Cosy Corner, Dedicated to those who love Alykanas & Alykes 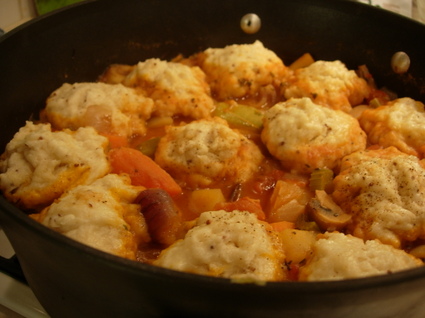 I've seen the weather over there and this is a real winter warmer. These Dumplings are just divine and a change from suet dumplings, which I love too.

I'm a little indulgent and like a fatty piece of lamb as it flavours so much better than lean cuts.

I also make this with Ox tail if you fancy a beefy variety.

I use Tesco soup and broth mix for stews, it's just a packet of lentil and Barley and stuff, ideal, but anything similar to add body will do.

You can make this in a pot or slow cooker it makes no difference, I wont bore you with the cooking differences, if you use a slow cooker you know how to change cooking times etc, if not let me know!

For the stew, you will need:

1. About a kilo of lamb on the bone, cut to fit your pot, (I use shoulder, but you'll need you butcher to cut it for you). Although a froxen leg joint works well!

2. A couple of medium sized potatoes, cut to potato size.

3. A couple of carrots, cut chunky, not sliced.

4. A turnip. (optional, I like them in a stew but you need to cut them in potato sized pieces.

8. A couple of Bayleaves

9. 3 tablespoons of Tesco soup and broth mix. Or just a few lentils and Pearl barley.

3. 1 dessertspoon of mixed herbs or just Oregano if you like

5. A good sprinkling of salt and pepper

6. A heavy pinch of nutmeg

To start, brown the meat in a large frying pan, just a little cooking oil will do but season heavily the meat as it browns. Once browned take the meat out and put it in your pot. In the juices left in the frying pan, add a little more oil if necessary, lightly fry off the onions. Stir them in the oil and juices and stir fry them on a good heat for just a couple of minutes and then pour them over the meat in the pot.

In 750 mils of boiling water, sprinkle your Oxo cubes and stir.

Put the rest of the stew ingredients into the pot, packing in as tightly as you can. Pour over the Oxo stock. If the meat is not covered, add a little water to cover it, Bring to the boil, then reduce to a very low heat, put a lid on the pan and simmer for about one and a half hours, stirring occasionally and topping with water as you go.

After this time, taste the stew and season until you achieve a balanced flavour. If the stew needs a little more stock flavour, add another cube until you are satisfied with the flavour.

Shape into a dome on the board and divide the dome into two. Then divide each piece in two and then again untile you have sixteen pieces. Roll them into balls, place them on a plate,  sprinkle them with nutmeg and then store them in your fridge.

If your pan isn't oven proof, Pour the stew into an oven proof dish and place the dumpling evenly in the top, then put the dish in the oven for about 30 - 40 minutes at about 200 degs, without a lid!.

The dumplings should crisp on the top, but not burn. 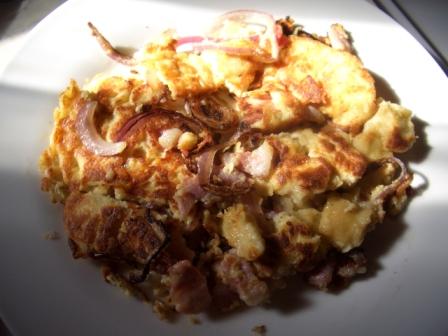 I love this. It's a great snack and very versatile. The guy i got this from used to call it his inside out Pizza!! But I like eggy bready thing!

I usally do one of these when I have bits in the fridge that need using or just fancy a cheesy snack.

I've shown it plain and not dressed it up because I want you to see it for the simple thing it is. It's great on it's own or with some salad.

Here i have given the ingredients for 1 person so just double it for 2 people and so on. Depending on your frying pan size, I would usually only make one for 2 peope at a time and make a second for 4 people, as in a normal sized frying pan it would end up too thick. The end result should be about half an inch thick.

2 slices of bread, crusts removed and cut into sall squares or even torn into small peices.

Half a medium onion, sliced thinly

Salt and Pepper to taste

First, crack the eggs into a bowl and stir the bread into it, season it to taste and leave to stand for about 20 minutes, stirring occasionally. Whilst you are waiting you can prep the rest. 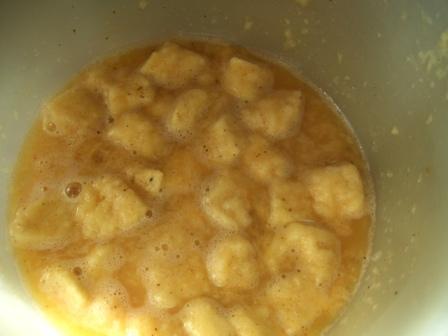 After 20 minutes, heat a small amount of oil in a fring pan and add the onion and bacon.

Fry for about 2 - 3 minutes on a high heat then add the cheese to the eggy bread and then all the mixture to the pan.

Mix together in the pan and form it into a disc in the centre, If there is not enough mixture to reach the edges of the pan. Squash it down a little with a food slice and leave it to fry for about another 4 minutes on a reasonably high heat.

If you wish to add a few thinly sliced peices of tomato now is the time to put them on top. I don't bother.

Carefully turn the formed patty over. Try your best to keep it together, but it will be difficult to stop it breaking. It doesn't matter if it breaks, it's just easier to see that all the patty is the right way up.

Fry for another 3 minutes then turn it out onto a plate. Divide if for 2 and serve.

This is good with leftover chicken. I usually leave the cheese out with that and add a few beansprouts of something similar.

With the cheesy version, a bit of sausage or mushroom goes well too, depends what you have in the fridge at the time. 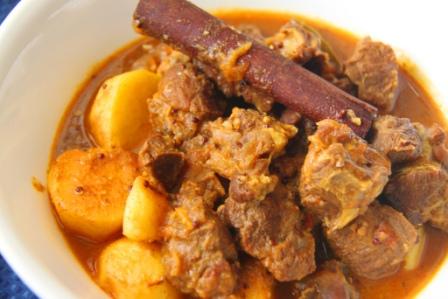 You can spend a lot of time and effort finding and creating wonderful flavours. This simple recipe is great for everyone, well only if you like curry that is.

I won't tell you how hot you should have it, that's not my business! if you don't like heat in your food then keep it mild but! don't drop any flavours. If your not sure about substituting any of the ingredients either experiment, or even easier! leave a message at the bottom of this page.

I often use a Masala of my own design for many Indian influenced recipes and you can do the same, but I want to show you that you don't need to buy all of your spices seperately to reproduce the wonderful flavours that have been handed to us from India, it is possibles to use Curry powder, which let's face it is essentually a Masala in it's own right, and still achieve the result you are looking for and not something that tastes like a Vesta Beef Curry, and I have to add at this point, we all knock it, but many used to enjoy Vesta curries!!! (though I'm not sure why)

This curry is also good if you are cooking for just one or two of you. I try to keep quantities, although not always possible, to amounts that are easily divided to make it easy to reduce the size of the meal so as to suit all.

If you like you can use processed products like "Very Lazy Garlic" & "Very Lazy Ginger" and it won't affect the end result much, if at all, but!! please make sure that you use fresh coriander for this as it will make a huge difference.

You will need for 4 portions:

about a pound of potatoes cut into potato sized peices

About 2" of fresh peeled ginger ground or grated, or 2 dessertspoon of VLG (very lazy ginger)

1 and a half tablespoons of medium curry powder or to taste.

Put everything except the onions in a bowl.

Get your hands dirty now, and rub all the ingredients into the meat and potatoes.

Cover the bowl with film or foil and put in a fridge to marinate over night. I think at least 12 hours is good, so prepping the night before is great and more hours wont hurt it.

The next day!! after a good nights kip and even a day at work, ah the bliss. and over a glass of wine!!!

Time to get them hands dirty again, it's great fun this ain't it!!

Seperate the meat from the potatoes and put the spuds to one side. Heat some oil in a frying pan and sweat off the onions, as soon as the onions slightly soften add the meat and all that remains from the marinade if any.

Brown the meat only. At this point you can add all the ingredients including the potatoes to a slow cooker, handy if you are off to work.

It's a matter of taste, but you can throw in a whole cinammon stick here!!

Alternativley, as soon as the meat is brown add 2 cups of cold water.

Bring to the boil and then pop in potatoes. Simmer on a very low heat for about 2 hours turning the potatoes occasionally.

If the water boils away top up slightly.

All you need to do is serve this in a bowl, maybe with some Naan bread to mop up the juices.

I've enjoyed cooking since I was a kid, but didn't really get into the serious side of it until having my own kitchen. My Mum is a great home cook which is where I get my cooking roots, and after living in Singapore as a child for almost 3 years I had sampled her cooking that had been influenced from both sides of the world and loved the contrast. Mum never lost that wholesome style of cooking that we enjoy in the UK and lends a little of that influence into her Asian style curries. Delicious!

I'm not a snobby cook. As much as I enjoy watching and reading cookery progs and books I hate the pompous attitude of the modern day chef or cook. Early cook books and shows like those from Mrs Beeton and Fanny Craddock would use all styles of cooking, ingredients and equipment, but nowadays many cooks will scorn upon modern methods as inferior, but I believe that there is room for all cooking styles as long as they are executed correctly, so I will use a microwave where i think it helps and I'm not afraid of a stock cube, as long as I don't have to rely upon it solely.
Jules and I have both been heavily influenced by Nigella Lawson and her relaxed style of cookery. She is the soul of the type of cooking we both love, not frightened of a good shortcut, but maximises the full flavour and depth of all the components of the dish she creates, but keeps it simple.

I thought that I would share with you some of the great recipes that we have adapted or even created ourselves. Most handed down, some copied but most adjusted to suit our own individual tastes. Even a few of our own sometimes too.

I hope I enjoy writing this as if I do I think it will make it more enjoyable for the reader!!